Just the mention of Japanese knotweed is enough to terrify households all around the country and we’ve only really been aware of it in recent years even though it has been in the UK since about 1850. What changed in last few decades of course was finance providers awareness of the damage it can do and they started to refuse mortgages because of it and its now become part of the devils work. I experienced knotweed myself about 10 years ago when it was found a few yards away from the back of a property I wanted to sell. I got the experts in and they cleared it and I got a fabulous golden ticket – it was the knotweed gone certificate! And I loved that certificate because it gave me a bonus sales item when I came to sell. Buyers would rather offer on a certificated knotweed free property than one that hasn’t been inspected when knotweed might come and scupper the sale later. So, I’m Ok with knotweed because of that positive experience but now there’s another option – just eat it! There’s an organisation called Eat the Invaders who practise ‘invasivorism’, and they advocate eating the knotweed. The knotweed apparently is a bit like rhubarb to eat and has a fruity flavour and makes a fabulous jam. It has to be handled carefully and even the left over bits cooked before they are discarded but it could be an unusual solution to a property owners problem.

First of all I have to say how great it is that we are having an International Women’s Day – but what a shame that we need one. Wouldn’t it be lovely if every day was ‘women’s day’ – in fact wouldn’t it be lovely if every day was a ‘men’s day’ as well! But of course one of the intentions is highlight the disparity between a woman’s lot and a mans and I must say in finance that disparity is particularly wide. A woman’s financial life starts off worse than a mans and it gets worse as time passes. A woman is less likely to have a job (by about 17%) than a man and if she does the pay is likely to be less (by an average of about £8k per year but that’s more, possibly as much as £15k, for younger people). Then she is less likely to save or invest – men investors outnumber women investors by 3 to 1 even though there is strong evidence that women make better investors. And a combination of all these things, and many more things, means that by the time a woman retires her pension is about 40% less than a male equivalent.  And THAT’S why we need International Women’s Day! We have to close this particular gap as these differences mean that women have less chance and choice in life – and that just isn’t fair.

Hometrak has just launched a new business called Upstix which is an ibuying service for quick property transactions where they claim you could move in a week. You list the property details and they say you will get an offer in 48 hours – but that offer will be at a below market price typically about 11% below. Now that won’t suit everybody but it will suit some who are in need to move quickly for whatever reason; or those who are just happy to accept a lower price.  I believe that Upstix just keep the properties as stock as they say that once an offer is accepted then completion will take place in about a week compared to a few months with a normal transaction. This is an interesting initiative but it gives sellers choice and for those who need cash quickly this will be a much needed alternative. Upstix aim to have about £600 million worth of properties by the end of the year. At the moment they’ve only bought a handful but let’s see how they go and anything that gives property buyers and sellers more choice is to be encouraged, and anything that relieves a seller or buyer from the relentless hold ups of a traditional transaction is an exciting development.

I have many people coming to me at the moment worried about investing during the Ukraine crisis. So here’s my take: with property you’ll be Ok as long as you stay out of Oligarch territory (generally the centre of London and the posh bits) and stick to the fundamental principles of where is there an excess of demand over supply and although that’s more or less anywhere in the UK at the moment there are some areas that are more extreme than others. So, with property I think you can carry on as normal but it’s more difficult to tell with share investing. If you’re unlucky enough to be heavy in shares or funds that are Russian based then your investment will have taken a huge knock. In fact, almost all shares worldwide have taken some sort of knock currently but there are those more heavily impacted than others. And that’s always the case. There are always some ups and downs and predicting what will move and how is a tricky and time intensive task – and even then you have the oddities that are Covid or the Ukraine crisis that are unpredictable.  But we should still invest in shares as overall, and in the long term, they give is a great return which outperforms savings rates significantly. And my approach to that is always to spread my risk very wide and I invest in tracker funds that cover many hundreds of different shares – and you can also get tracker funds that track one country or several countries. For most if us we don’t want to spend a huge number of hours trying to time the stock market, we just want to get access to the returns the market gives without it being too time intensive. Of course, for those who have share investing as a passion and want to get heavily involved that’s fine but for the rest of us we just want simple and quick and that’s a tracker fund, either UK based or International. Tracker funds track every share in the market they’re covering so there will always be some going up and some going down but overall the returns are good. You won’t get the super duper highs but you won’t get the soul destroying lows either – that’ll do for me! 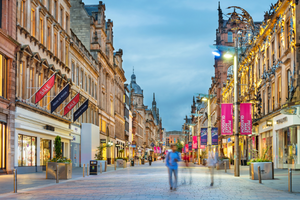