Home / Blog / HS2: The Plan and Effects of a High Speed Railway

HS2: The Plan and Effects of a High Speed Railway

For those who haven’t heard HS2 is a planned high-speed railway linking London to the North of England. The parliament approved the project in 2017 and since then clearance for the line and station has already started. In August 2019 the government conducted a review to see if the plan should go ahead as planned and while the full results are being held back until after the election the conclusion is that HS2 will still be built although there may be minor changes to how this happens that are unknown at the moment. In conjunction with this, the major political parties have expressed support for the railway. Different parties have done so with varying degrees of enthusiasm but, despite doubts that the project can remain within budget, the current view is that HS2 will be built at some point. So, we wanted to see what current plan and timescale is and how that might affect the property market.

For an easy overview of the plan, the BBC published an article with a really useful map to help visualise the project. Here it is: 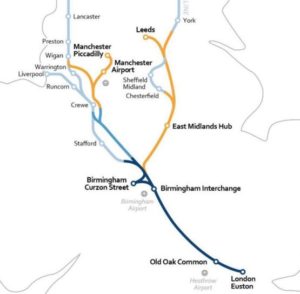 The plan is for the train to continue up to Edinburgh, going through Penrith, Carlisle and Newcastle using the already present ‘West Coast Main Line’ and ‘East Coast Main Line’ although these lines operate at the slower speed of 125 mph compared to the planned 225 mph. As you can see on the diagram the line is split into a few colours. These correspond with the different phases of its construction. The dark blue section is phase 1, the slightly lighter blue section is phase 2a and the orange section is 2b. The lightest blue sections are the pre-existing rails. Despite the numerical labels they will not be completed in chronological order. The first to be completed will be phase 2a, the short section between the West Midlands and Crew, which will see its first services in 2027. Phase 1, from London to the West Midlands, will be the next up and running in 2028. Phase 2b, continuing to Leeds and Manchester won’t be ready until 2033.

So, there is still a long time before these will be operational and so any affects they may have on the market are still yet to happen. The obvious big affect will be a reduction in journey times to and from the larger cities. This will be more evident with long distance travel but even with shorter distances the aim is to see significant reductions. Therefore, if you are looking for property in the towns being near a station will be even more important than usual as we will expect to see a massive increase in demand. Same goes for if you currently own a property near the station in these towns as its vale may increase drastically the closer to the opening day for HS2. Reduction in travel times might also make towns situated on the line more viable catchment areas for commuter tenants. As the diagram shows there aren’t any major towns around London where the line goes through. So, to utilise this transport change we will need to look at the Midlands and above as this is where the highest proportion of stops are. Luckily for us Manchester, Liverpool and Leeds are al in the top 10 for job growth in the UK at the moment so there should be plenty of demand for commuters to these cities on the HS2 line.

The HS2 is still a long way off and technically still in limbo, whoever comes in in December will have the opportunity to stop it despite the fact the government report still supports it. So, it will be important to keep an eye on the news especially over the next couple of months but we’re sure the situation will be all over the news outlets so it will be hard to miss. If we do get a confirmation then expect prices and demand to creep up in relevant towns over the next couple of years. For more information on HS2 we’ve added all relevant information from news outlets as well as official government updates.